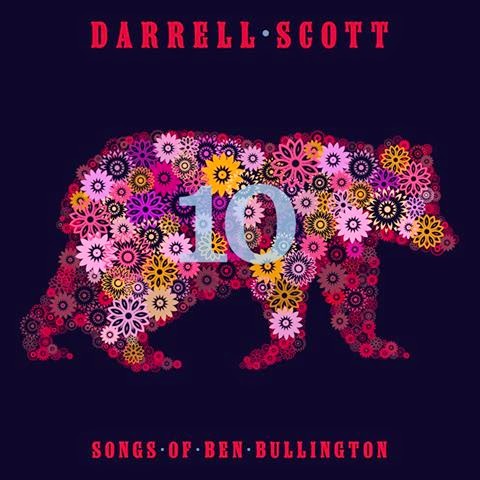 Songwriter extraordinaire Darrell Scott is releasing his 11th cd on May 19, 2015. 10 - Songs of Ben Bullington, is a tribute to Montana doctor/songwriter Ben Bullington who died of pancreatic cancer in 2013. The two songwriters met in Montana and forged a friendship and mutual admiration society.

Scott’s interpretations of Bullington’s songs make this a singularly interesting project and will certainly open many ears to songs that may not ever have been heard without his involvement. Bullington released five cds of original songs, with only one co-write - Little Feat’s Bill Payne collaborated on “The Last Adios.” Even though his touring was limited by his full time medical practice, Bullington was joined on recordings by friends Rodney Crowell, Mary Chapin Carpenter, Tracy Nelson, Payne, Will Kimbrough and a slew of other top musicians. His musical impact was strengthened with performances at the Kerrville Folk Festival, the 30A Songwriter Festival, Jammin’ at Hippie Jacks and performances all over the country.

Darrell wrote the importance of recording the songs of his friend Bullington:


we met as fathers- divorced fathers- camping in the national forest east of yellowstone with my 3 kids and ben’s 2 youngest – (mutual friend,  joanne gardner, thought we 2 divorced fathers oughta meet) –  though we were both songwriters, we did not play songs ’round the campfire – we tended to our kids – we encountered a male grizzly all too near our pre-teen boys exploring a clearing one mid-morning – that grizzly scene will stay with me for the rest of my life with ben & me waving our boys to safety up to the bluff where we could see what they could not – we all watched as the grizzly passed within 100 yards – he didn’t even look up at us

i still had not heard ben’s songs until he had 1 year to live-(as an MD he knew what the lab results meant) a nashville writers round was on his bucket list (will kimbrough, rodney crowell, ben and me) and THAT is where i began to hear his songs in earnest…it was all there: song after song of hearing someone who loved song as much as i loved song- who knew form and power of what this “simple” art can do –  a practicioner

the last time i saw ben, i thought he’d wanna talk death and leaving this world – instead, he wanted to talk songs & guitars – so we did (he even turned me on to 2 new writers) – now,  ben bullington and his songs will stay with me for the rest of my life – like the grizzly

in the last 3 months of ben’s life i started sending iphone recordings of me singing a song of his – the first iphone recording, “i’ve gotta leave you now”, closes this album – this recording is what ben heard – he loved it…(what i wanted was for ben to hear his songs coming toward him rather than only from him – for a writer, it is an important perspective: to hear songs with 1 degree of seperation – like you’re hearing some one else’s songs)

3 days in dirk powell’s studio & home in breaux bridge, louisiana in november, 2014 while on the road, 8 songs were recorded s i m p l y – no tricks, no hiding – just me & engineer, erick jaskowiak-  add a live version of “country music i’m talking to you”  from texas gigs the week before- add the iphone recording he’d heard and you get 10

my wish is for you to slow down for 52 minutes, put this recording on and hear 2 friends make new friends – i believe there is pure beauty here – these songs are perfect examples of “song as literature” – 10 is an intimate gift for a fellow father and human being and songwriter whom i knew for a short, but powerful, time – ben’s songs are timeless – i loved getting right in the middle of these songs and offering my best – these are great songs: period.

Advance reviews of “10” are extraordinary. Songwriting icon Rodney Crowell says, “Ben Bullington was a friend. I knew his heart. After listening to ‘10’ I can say, with all sincerity, Darrell Scott has created a masterwork. His readings of Ben’s songs are tone perfect. He’s captured beautifully with guitar, piano and soulful voice, the very album Ben dreamed of. I know this as surely as I know the names of my children. The stillness and unhurried revelation that is the hallmark of Ben Bullington’s best songwriting, thanks to Darrell Scott, is alive and well.”

Mary Chapin Carpenter adds, “I love Darrell Scott and I loved Ben Bullington. To hear one great songwriter inhabit another’s work is a breathtaking experience, and it makes me happy to imagine that Ben’s gifts will live on through Darrell’s interpretations."
Posted by That Nashville Sound at 8:01 PM