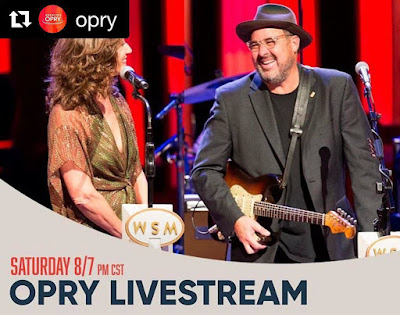 As the earth spins around like any other day, our lives living on this big rock are anything but. Terms like social distancing have gone mainstream and yesterday, a massive 2+ trillion dollar economy stimulus bill was passed to help rescue some of the reported 25% of Americans that have lost their job or been furloughed in this crazy time. Here's hoping you can let country music help be a diversion from some of the harsher stuff going on in the world...


~ Country music fans can’t come to Nashville to see the Grand Ole Opry, so Circle All Access and the Opry are bringing Saturday Night Opry to the globe. Tune in tonight for the Opry’s 4,917th consecutive Saturday night show as Vince Gill, Amy Grant, daughters Jenny Gill and Corrina Grant Gill take the stage for an intimate live performance.  Tune in to the livestream event at 8PM ET / 7PM CT on Saturday, March 28 at Circle All Access on Facebook, or Circle All Access on YouTube.

~ Think a healthy thought for country legend Joe Diffie. Diffie, 61, has tested positive for COVID-19, he said via a statement. “I am under the care of medical professionals and currently receiving treatment. My family and I are asking for privacy at this time. We want to remind the public and all my fans to be vigilant, cautious and careful during this pandemic,” Diffie said.

~ Craig Morgan unveiled the details on his upcoming latest album, God, Family, Country, set for release May 22 on Broken Bow. The album includes five new tracks and remastered versions of some songs recorded over the past six years along with his faith-filled tribute to his son Jerry, “The Father, My Son, and the Holy Ghost.” Says Morgan, “This album is based on everything that’s happened in my life and my career,” Craig says. “I feel like I have some of the most quality songs I’ve ever recorded, and there is a new energy here. After all I’ve been through, I’m at one of the most inspired places I’ve ever been.”


~ Watkins Family Hour, the acclaimed musical collective featuring Grammy Award-winning siblings Sara and Sean Watkins (also 2/3 of the band Nickel Creek) announced their upcoming new album, brother sister, which is due April 10 via Family Hour Records/Thirty Tigers. Of the project, Sara shares, “It felt really good to dig into the potential of two people…the primary goal of this record became to see what we could do when it is just the two of us. The arrangements and the writing were all focused on that. Listening now, I’m really proud of what we did. These are songs that would not have come out of either one of us individually and it feels like a band sound, like this is what we do, the two of us.”

~ Sarah Jarosz announced that she will be releasing her 5th solo album, World On The Ground, on June 5th. Says, Jarosz on the project, "World On The Ground captures the music that producer John Leventhal and I created in the control room of his home studio in Manhattan throughout the second half of 2019. Many of the performances that made it onto the album were often demos that neither of us thought would be the final takes. From the beginning of this recording process, John challenged me to be more detailed in my writing — to create lyrics that told a story. A wealth of ideas opened up from the moment we began working together, and so many of the images that emerged during the writing process were based on my memories of the landscape, the people, and my experiences growing up in the Texas Hill Country."

~ Kip Moore also announced an upcoming project announcing that his fourth album Wild World will be released on May 29. Says Moore on the new album, “We wanted this project to be more in-your-face. More earthy, more analog. I know it’s an unsettling time for a lot of people right now, and so my hope is that this music can bring even just one person some peace. I try to make music that reaches people in a pure sense – something that’s light and easy to carry with you, but 1000 pounds of weight at the same time, and I think Wild World is just a depiction of what I see. Life is one crazy, wild ride. But it can be so simple if we look for the right things, and I think that is more important than ever right now.”

~ The new album announcements just keep coming. Gwen Sebastian will be releasing the album sequel of sorts to her 2017 project with an April 24th release of Once Upon A Time In The West: Act II on Flying Island Records.

~ And last, but certainly not least, Lennon Stella has a new project coming out called Three. Two. One. out on April 24th as well. It is the debut album from the Nashville-based singer, songwriter, actress, and multi-instrumentalist. Stella first rose to popularity when she was just 12 years old as part of the duo Lennon & Maisy, alongside her younger sister. The pair gained national attention with a cover of Robyn's "Call Your Girlfriend". Lennon then went on to star in the ABC/CMT smash television series Nashville as Maddie Conrad for six years.

~ Earlier this week, we announced some country artists that were going to stream online concerts. Here's a handful more that have been added in the last couple days.