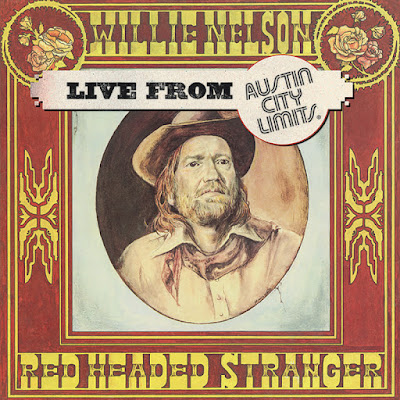 Artist: Willie Nelson
Album: Live at Austin City Limits 1976
Label: Legacy
Release date: November 27, 2020
Willie Nelson and Legacy Records are releasing a vinyl LP release on Black Friday for Record Store Day that marks the first release for a historic recording of Nelson's landmark album on one of music's most hallowed stages. The result is the release of Live at Austin City Limits 1976.
Willie Nelson has appeared on Austin City Limits more than any other artist, performing on the pilot and seventeen subsequent episodes of the Texas Public Television institution that debuted in 1976 and is still going strong as the longest running music series in American television history. This performance was captured in 1976 and aired as the premiere episode of the second season the following year. It found Willie and The Family performing his classic album Red Headed Stranger front to back in an amazing performance and this RSD Black Friday edition marks its first audio release.

The RHS LP arrived on May 1, 1975. Nelson drew inspiration for the album from a similarly named song he used to spin as a disc jockey in Fort Worth. The concept effort is famous for its sparse arrangement — Rolling Stone compared the music to Ernest Hemmingway’s masterfully concise prose — and traces the narrative of a fugitive on the lamb after killing his wife and her lover.

The record’s lead single, Fred Rose’s “Blue Eyes Crying In The Rain,” would become Nelson’s first No. 1 as a performer. While much of Red Headed Stranger features Nelson’s interpretations of older country and traditional songs, it also boasts stellar originals like “Time Of The Preacher,” “Denver” and the instrumental composition “Bandera” which serves as the album’s ride off into the sunset.

The October 4, 1976 Austin City Limits performance of Red Headed Stranger — marking Willie’s second ACL outing after appearing on the pilot episode in 1975 — aired as the second season opener in 1977.