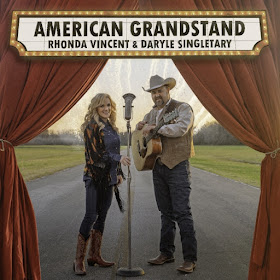 There's not much more American and patriotic than bluegrass and traditional country music so it seems only fitting that the long-awaited collaboration between Rhonda Vincent and Daryle Singletary should be coming out the week of the 4th of July.

In an interview with the West Virginia Herald-Dispatch:


"I love singing with Daryle," she said. "Our voices have a very special magic when we sing together. We sing a lot alike when we turn a note, and I think more than anything that we challenge each other. We will get a little crazy when we're in the studio. There is no other way for me to describe this project other than it is very special."
Vincent is happy with the upcoming album with Singletary for a lot of reasons, one in particular being that they both recorded their vocals in the studio at the same time. That can be a rarity in this day and age of digital recording.
"Because Daryle has a little kid at home, at first we said, 'OK, you come into the studio and sing your parts,'" Vincent said. "Daryle did that for about 30 minutes and he said, 'This is really not going to work like this. We have got to sing together.' So, after that, we never sang apart. We always sang at the very same time on this album."
"Traditional country music is a whole different genre," Vincent said. "A lot of people will say that there is not a market for traditional country music, but I know that is not true as it has its own niche. I did that traditional country album with Gene Watson not long ago, and I found out that there is a tremendous audience out there for traditional country music. Daryle and I have been doing shows together, and he is so much fun. When everybody hears this new album, they will know how special it is."

If you should be local to Nashville, the duo will be having an album release party on July 8 at the Nashville Palace as well as performing on Music City Roots together on July 7.
That Nashville Sound at 8:27 AM
Share