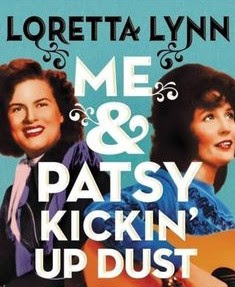 
Loretta Lynn is an American country music singer-songwriter icon in every sense of the word.  Her groundbreaking career spans almost 60 years, with such famous hits as "You Ain't Woman Enough (To Take My Man)" and "Coal Miner's Daughter," as well as a biographical film and book of the same name. With more than 45 million albums sold worldwide, multiple gold albums, and numerous awards and accolades, Loretta is the most awarded female country recording artist and the only female ACM Artist of the Decade. She's known not only for her still-incredible voice, but also for her down-to-earth quality, quick wit, and humor. Patsy Lynn Russell, Loretta's daughter, is a singer-songwriter and music producer in her own right who has made it her mission to keep her mom's story and legacy alive for future generations of empowered women. Together, they've come together to write a story about Loretta's close relationship to another country music icon, the incomparable Patsy Cline. This new memoir shares the never-before-told story of the remarkable relationship between the legendary country queens Cline and Lynn.

"Full of laughter and tears, this eye-opening, heartwarming memoir paints a picture of two stubborn, spirited country gals who’d be damned if they’d let men or convention tell them how to be. Set in the heady streets of the 1960s South, this nostalgia ride shows how Nashville blossomed into the city of music it is today. Tender and fierce, Loretta & Patsy is an up-close-and-personal portrait of a friendship that defined a generation and changed country music indelibly–and a meditation on love, loss and legacy."

The dear friends had known each other for only 18 months when Patsy was tragically killed in a plane crash at 30 in 1963. But they packed a lot of memories into that short period of time. “Patsy showed my mom, who was 28, how to shave her legs,” Loretta’s daughter reveals. “My mom still has the razor Patsy gave her — it’s in her [Coal Miner’s Daughter] museum at her ranch in Hurricane Mills [in Tennessee].”

Eerily, it was a car crash that first brought the women together. Patsy was in the hospital recuperating from injuries she’d suffered in an auto wreck when she heard Loretta sing “I Fall to Pieces” on a live radio show broadcast from Ernest Tubb’s Record Shop in Nashville. The lesser-known Loretta dedicated Patsy’s hit song to her along with get-well wishes.

“Patsy’s husband, Charlie Dick, drove down to the record shop that night and told my mom that Patsy wanted her to visit Madison Hospital,” says Patsy Lynn. “My mom said she was nervous because she thought Patsy may not have liked her singing the song. But of course she did, and from the start, they became the best of friends.”
Posted by That Nashville Sound at 8:23 AM