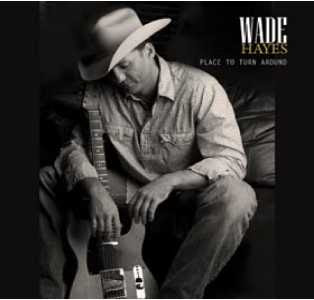 The Background:
Wade Hayes made his debut in 1994 on Columbia Records with his gold-certified album Old Enough to Know Better. Its title track, which served as his debut single, reached Number One on the Billboard charts. Three more singles from it all reached Top Ten as well including “I’m Still Dancing With You,” “Don’t Stop,” and “What I Really Meant To Say.” He also had a big hit with 1996's “On a Good Night.” Recently, he has been playing guitar and singing harmony for Alabama’s Randy Owen out on tour. Hayes has just released his 5th album on 7/29/09 entitled Place To Turn Around.

The Review:
With apologies to Yogi Berra, it’s time to rediscover Wade Hayes for the first time. Place To Turn Around is everything that is great about indie records. Imagine hanging around your favorite honkytonk bar and hearing an artist singing great neo-traditional country music with acoustic guitars, fiddle and steel and buying an album at the side of the stage following the performance. And then imagine that the artist you were listening wasn’t some unknown band, but a road-tested Nashville songwriter and musician with many hits under his belt. That is the experience of listening to Wade Hayes brand new album. With an emotive voice and meaningful storytelling lyrics, this is country music that is getting very little representation on the radio dial. It’s everything Jason Aldean isn’t. What might have not been that unique in the 80’s and early 90’s is fresh and new. Hayes’ emotive baritone voice is a bit throaty and breathless when he sings higher notes or with power. But that so-called-fault in his voice only gives the songs more emotion and feeling. On songs like “Every Time I Give The Devil A Ride” and “Good Day To Go Crazy,” we’re reminded what a great guitarist and underrated instrumentalist that Hayes has always been. His picking is as skilled as anything Brad Paisley has put out on these two tracks. The production is focused on more acoustic sound than the current country music landscape and is beautiful as well. From the beautiful mandolin “singing” harmony on the title track to the terrific pleading lyrics for God to perform a healing miracle on “What’s A Broken Heart For You,” this album is an unexpected gem and one of our favorite top ten albums released thus far into 2009.

Track Highlights (suggested iPod adds):
The Best Part
What’s A Broken Heart For You
Place To Turn Around
Every Time I Give The Devil A Ride

The Verdict:
Four Stars Out Of Five
Posted by That Nashville Sound at 6:00 AM