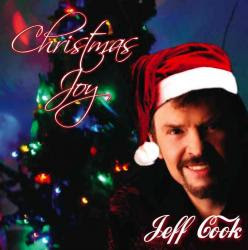 With the Holiday Season just around the corner, Jeff Cook, a two-time GRAMMY winner and multi-platinum selling founding member of Country Music powerhouse Alabama, is preparing the upcoming release of his first ever solo Christmas album, Christmas Joy. On Tuesday, November 3, the album will be available for digital download via i-Tunes, Amazon.com, and Cook's website, www.jeffcook-agb.com.

The ten track album will feature several tried-and-true classic Holiday hits including “Run, Run Rudolph” and “Away In A Manger” as well as original Alabama material rerecorded by Cook. Legendary Rock n’ Roll Hall of Famers The Ventures join Cook, a Country Music Hall of Famer himself, on the project’s title cut, “Christmas Joy.” Cook also brings in his better half, Mrs. Lisa Cook, for lead vocals on several songs.

“This is my first solo Christmas project and I have tried to select varied and not too overplayed Christmas songs" notes Cook.

Jeff Cook and Alabama have a career that to date has resulted in 21 gold, platinum and multi-platinum albums and more than 78 million records sold. The band garnered 42 #1 Hits and were named the RIAA’s “Recording Group Of The Century.” In 2005, Alabama was inducted into the Country Music Hall of Fame and in 2001 Cook was named “Guitarist of the Year” by the Gibson Guitar Company.

1. Christmas Joy
2. Rock & Roll Guitar
3. Away In A Manger
4. Run, Run, Rudolph
5. Reggae Santa
6. Homecoming Christmas
7. Please Come Home For Christmas
8. The Night Before Christmas
9. If We Make It Through December
10. My First Christmas In Heaven
Posted by That Nashville Sound at 8:20 PM

Email ThisBlogThis!Share to TwitterShare to FacebookShare to Pinterest
Labels: Alabama