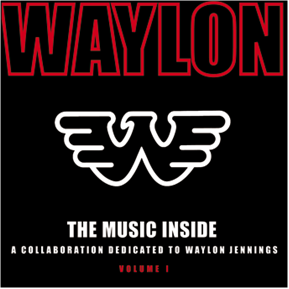 The three volume celebration, THE MUSIC INSIDE: A COLLABORATION DEDICATED TO WAYLON JENNINGS, features some of the biggest stars of Country music –from legends Kris Kristofferson and Alabama to hit makers Jamey Johnson and Trace Adkins to critically-acclaimed Patty Griffin and Sunny Sweeney – performing and paying tribute to Jennings’ most-celebrated songs. (The official Vol. I track listing is below.)

Every artist on the project possesses either a personal or professional connection to the Texas-born Jennings, and no one more so than Country star and Jennings’ widow Jessi Colter, who performs a heartfelt duet of “Good Hearted Woman” with Sunny Sweeney. Their son Shooter Jennings also pays tribute with “Belle of the Ball,” appearing on Vol. I. In addition, every performance on the compilation earned Jessi and Shooter’s blessing.

“There have been several tribute albums made in my father's honor, all of which were great tributes to his legacy. But this one has been a true passion project for a lot of artists and friends who truly wanted to remember and give back to the wonderful man he was,” says Shooter. “In the years since my dad passed away, I've grown as an artist and I feel this is the first time I'vebeen able to give back truly to the man who inspired, influenced and nurtured me and my musical passion.”

Spearheaded and produced by Scatter Records founder Witt Stewart, the project was born in 2007 while Stewart was visiting his hometown of Lubbock, Texas. Recalling the days when Jennings and Buddy Holly used to rehearse down the street from his own home and Jennings’ days as a local DJ on KLLL, Stewart contacted Jessi Colter and from their first meeting, they began recording in Jessi’s Arizona living room on August 20, 2007, the project -- a labor of love for both -- was born.

“This project started with double rainbows and ended with double rainbows....a promise I'd say; as I think this could have been a prayer Waylon may have prayed....artists doing what they love for love,” says Colter. “I couldn't lead such a monumental effort. But, Witt set his face like a flint to finishing what he began and I am expecting Waylon to break the sound barrier again with the help of way cool artists too numerous to name. Thank you God for the vision you gave Witt, the artists who showed love in their music and, Waylon who gave us all a reason to listen again to whatmusic really means. Bravo!!!”

Two and half years and 33 tracks later, Stewart met with Big Machine Label Group President & CEO Scott Borchetta on a cold, windy day in New York City. From the moment they met, Stewart knew BMLG was the right partner to release the hallowed collection.

“It was clear that Scott had really "listened" to the music,” explains Stewart. “The comments he made and questions he asked, I knew he had spent a lot of time with the music. And with his track record, he knows a few things about a hit song. Add that, due to his genuine love for Waylon and Jessi, there was no other home for the project but his house.”

“The music of Waylon Jennings and Willie Nelson was some of the first music I ever fell in love with and one of the biggest reasons I moved to Nashville to work in Country Music,” says Scott Borchetta, President & CEO of the Big Machine Label Group. “Ironically, my dad also worked Alabama’s first singles when they were with then-independent label Stargem Records. It all seems to have come full circle with Alabama releasing the first single from the Vol. I compilation with our label group.”

Leading the launch of the compilation series is legendary super group Alabama, who reunited to record Jennings’, “Are You Sure Hank Done It This Way” for Vol. I -- the first new recording from Alabama in a decade.

“What an opportunity for us to go back in the studio, play and record live like we used to, and pay tribute to a TRUE legend in music...not in country music...in music period,” says Randy Owen of Alabama.

Adds Alabama’s Teddy Gentry,"This is probably as close as I'll get to being a real outlaw...Thanks Waylon!”

"Waylon was one of a kind,” continues Alabama’s Jeff Cook. “We did a lot of his songs in our early years. It's nice to be a part of this tribute album!"

“Are You Sure Hank Done It This Way”, the lead single from Vol. 1 of the compilation series, impacts Country Radio on Nov. 29th with an official add date of Dec. 13th. A preview of the new song can be heard at: www.WaylonJennings.com

1. This Time – Jamey Johnson
2. Are You Sure Hank Done It This Way – Alabama
3. I’m A Ramblin’ Man – Randy Houser
4. Belle of the Ball – Shooter Jennings
5. Good Hearted Woman – Sunny Sweeney and Jessi Colter
6. Don't You Think This Outlaw Bit's Done Got Out Of Hand – James Otto
7. Just To Satisfy You – John Hiatt w Waylon Jennings
8. Rose In Paradise – Kris Kristofferson and Patty Griffin
9. You Ask Me To – Trace Adkins
10. Go Down Rockin' – Waylon Jennings
11. The Wurlitzer Prize (I Don’t Want To Get Over You) – Chanel Campbell
Posted by That Nashville Sound at 9:00 AM