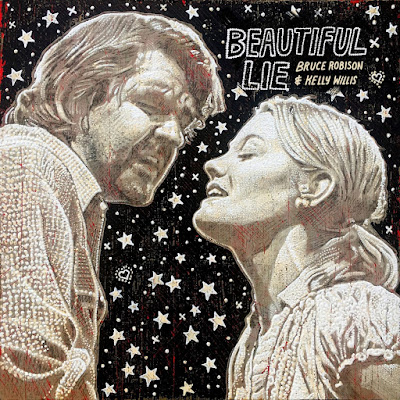 Bruce Robison and Kelly Willis are each renowned for crafting some of the most enduring music on the vast Texas country and Americana landscape. For only the fourth time in their history as a couple, they’re collaborating again. Beautiful Lie will arrive on the summer solstice, June 21, 2019, on Robison’s The Next Waltz label. The album’s first single, “Nobody’s Perfect,” will be released on May 10, followed by a tour commencing on May 19.

Produced by Robison at the Bunker, his all-analog studio in Lockhart, Texas, outside of Austin, Beautiful Lie finds the pair harmonizing on a mix of originals, well-chosen covers and choice vintage nuggets, including the two-steppin’ country classic, “One Dime at a Time.” The title tune was plucked from the Amazing Rhythm Aces’ 1975 debut album; the sad ballad, “Lost My Best,” is by Uncle Walt’s Band veteran David Ball. Grammy nominee Adam Wright (Alan Jackson, Lee Ann Womack) contributed three tracks, one written with his wife, Shannon. Robison’s four contributions include the single and a co-write with Jack Ingram titled “Astrodome.” (He also nods to the dome’s home in the pretty closing duet, “Heartache to Houston.”)

For Robison, it’s always about the song. He’s written plenty of great ones — and ridden several to the upper reaches of Billboard’s country charts. (Tim McGraw and the Dixie Chicks hit No. 1 with “Angry All the Time” and “Travelin’ Soldier,” respectively; George Strait reached No. 2 with “Wrapped” and No. 6 with “Desperately.”)

Master stylist Willis, a 1993 Academy of Country Music Awards Top New Female Vocalist nominee, has received several Austin Music Awards including 1999’s Album of the Year for What I Deserve, her widely praised breakout effort. In the tradition of country’s greatest ladies, Willis knows how to find the heartache in a note and hang her voice on it, as demonstrated on “Nobody’s Perfect.” When she and Robison trade verses or harmonize, backed by a stellar gang of Next Waltz regulars, the effect is simply beguiling.

Posted by That Nashville Sound at 6:10 AM