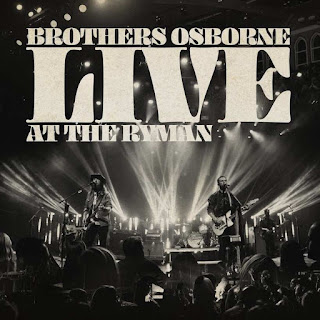 Brothers Osborne are set to release their new album, Live At The Ryman, digitally on Oct. 11. Recorded during their three-night, sold-out run at the famed auditorium earlier this year, the album will feature the band’s Platinum-certified hits such as “Stay A Little Longer” and “It Ain’t My Fault” as well as fan favorites like “Weed, Whiskey And Willie” and “Love The Lonely Out Of You.”

“The Live at the Ryman album highlights who we really are,” John Osborne says in a video clip announcing the release. “To play this place one night is a gift and an accomplishment that everyone should remember but the fact that we did it three, I can’t even wrap my mind around it.”

Adds brother TJ, “Recording at the Ryman is an incredible experience. This place never loses its charm or luster. I hope it never does for me. It’s always a special spot. This room just has a way about it … it has this comforting soul about it.”

John and TJ Osborne’s current Top 40 single “I Don’t Remember Me (Before You)” will be included on the new live record, and the duo recently released a sentimental video for the track. The Maryland natives are set to reunite with Chris Stapleton on tour later this Fall, and will also open select dates for Willie Nelson, including Farm Aid on Sept. 21.

Live At The Ryman Track Listing:

Drank Like Hank
Shoot Me Straight
I Don’t Remember Me (Before You)
Weed, Whiskey and Willie
Down Home
Rum
Pushing Up Daisies (Love Alive)
Tequila Again
21 Summer
Love The Lonely Out Of You
Stay A Little Longer

It Ain’t My Fault

Posted by That Nashville Sound at 6:31 AM