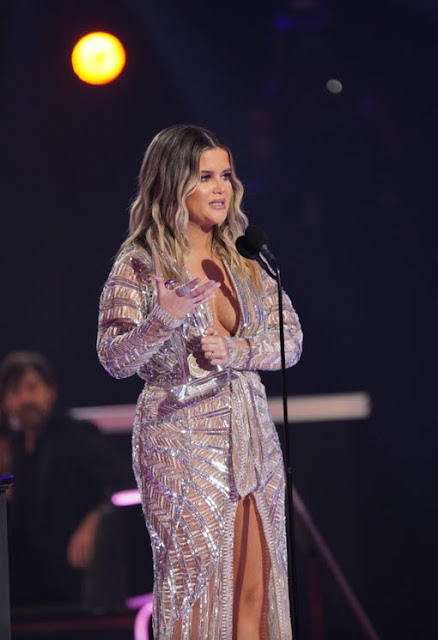 It was a celebration of country music during The 54th Annual Country Music Association Awards on Wednesday night in Nashville, Tennessee.

The Reba McEntire and Darius Rucker hosted ceremony kicked off with an emotional tribute to country great Charlie Daniels, who unexpectedly died in July of a hemorrhagic stroke. Jason Aldean, Dierks Bentley, Brothers Osborne and Ashley McBryde delivered a show-stopping medley of Daniels’ songs including “Trudy,” “Texas,” “Long Haired Country Boy” and “The Devil Went Down to Georgia.”

This year’s CMA Awards presented a mix of in-person and pre-recorded performances in front of a social-distanced audience filled with the biggest names in country music.

Not only did the night feature performances from country heavyweights like Miranda Lambert, Keith Urban, and Eric Church, pop artists took the stage as well. Charlie Puth joined Gabby Barrett to perform “I Hope” and Justin Bieber joined Dan + Shay to deliver vocals from their collaboration “10,000 Hours.”

Hosts McEntire and Rucker also took the stage to honor the late Mac Davis who died in September 2020 following heart surgery. Together, the duo debuted their take on Davis’ timeless piece “In The Ghetto,” which he famously penned for Elvis Presley. Country singer and songwriter Joe Diffie, who died this year of COVID-19 complications, was also honored with a performance of his song “Pickup Man” sung by Jon Pardi.

Other notable performances included an homage to the 1980’s Western film Urban Cowboy from Old Dominion. The group performed “Looking For Love” from the movie’s soundtrack, which Rucker credited with changing the world by suddenly having “everybody, everywhere wearing cowboy hats and learning to line dance.”

When it came to awards, Maren Morris started off on fire, snagging the first two awards back-to-back for Single of the Year and Song of the Year for her record “The Bones,” which she later performed. She also won Female Vocalist of the Year and, during her acceptance speech, she shouted out the “amazing Black women” in country music, including Linda Martell, Yola, Mickey Guyton, Rissi Palmer, Brittney Spencer and Rhiannon Giddens.
“There are so many amazing Black women that pioneered and continue to pioneer this genre,” she said. “You have made this genre so, so beautiful. I hope you know that we see you. Thank you for making me so inspired as a singer in this genre.”
Luke Combs followed closely behind Morris, taking home two CMA Awards for Album of the Year and Male Vocalist of the Year.
Charley Pride was presented with the Willie Nelson Lifetime Achievement Award by Jimmie Allen, who first serenaded the crowd with a snippet of his song “Best Shot” and attributed a lot of his success to the country music hall of famer.
The last award of the night was the highly coveted Entertainer of the Year Award, which Eric Church took home — much to his own surprise.
“I didn’t think I was going to win this,” he said before exiting the stage. “Thank you guys very much.”
He also touched on the current state of the world and shared his belief that music will bring “us out of this.”
“That is the one thing that is gonna save the entire world,” the singer declared.
Entertainer of the Year
Eric Church
Male Vocalist of the Year
Luke Combs
Female Vocalist of the Year
Maren Morris
Album of the Year
“What You See Is What You Get” Luke Combs — winner
Single of the Year
“The Bones” Maren Morris
Song of the Year
“The Bones” Maren Morris (written by Morris, Jimmy Robbins, Laura Veltz) — winner
Vocal Group of the Year
Old Dominion
Vocal Duo of the Year
Dan + Shay
New Artist of the Year
Morgan Wallen
Musical Event of the Year
“I Hope You’re Happy Now” Carly Pearce and Lee Brice
Music Video of the Year
“Bluebird” Miranda Lambert
Posted by That Nashville Sound at 5:53 AM