With the nation getting vaccinated at a record clip and herd immunity getting ever so closer with each passing minute, a day on the horizon in which we get back to a day full of live shows and normalcy seems within reach. It certainly has ramped up the country music machine and lots of news from a lot of country music vets was released this week. Here's some snapshots.

Some new music videos over the last week:

Ashley Monroe - "'Til It Breaks" - watch HERE
Midland, in conjunction with their music label and CMT have released a new musical documentary of sorts that highlights their origin story. It's called Midland: The Sonic Ranch Documentary. Here's the description: "In the Spring of 2014, Mark Wystrach, Jess Carson, and Cameron Duddy took 11 days out of their very separate lives to head down to the Sonic Ranch, a studio nestled along the dusty American side of the Rio Grande outside El Paso, Texas. Midland was not so much a band as an experiment fueled by an assortment of spirits - but mostly tequila and the possibilities painted in their imaginations. They had no record label or manager and they had never played a show together. These recordings capture three friends, at a live-in studio in the desert, trying to make a dream come true." You can watch the doc HERE. 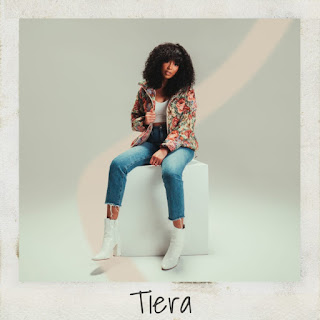 Rising country newcomer Tiera has released her self-titled debut EP.  The Alabama-native was the flagship songwriter for Nicolle Galyon’s female-driven publishing house, Songs & Daughters. She was inducted into CMT’s Next Women of Country Class of 2020 and was honored by the AIMP for their Rising Songwriters Class of 2020. Tiera also hosts an Apple Music Country radio station.
“When I put out ‘Found It In You’ I hadn’t planned to release a full EP, but as my fans grasped onto the single I decided to release this whole collection of songs,” says Tiera. “It was really important for me to release my first full project independently because I wanted to make my stamp on country music in my own way. This is my way of introducing everyone to who I am as an artist. I wrote all of the songs with my friends and favorite collaborators; it is 100% true to me and I hope people have just as much fun listening to these songs as we did writing them.”
Tiera Track List:
“Found It In You” (Tiera, Cameron Bedell)
“Not Your Girl” (Tiera, Cameron Bedell, Jack Newsome)
“Laid Back” (Tiera, Mike Robinson, Rocky Block, Sarah Troy)
“Miles” ft. BRELAND (Tiera, Cameron Bedell, Daniel Breland, Jared Scott)
“Shut It Down” (Tiera, Cameron Bedell, Jared Scott, Neil Medley) 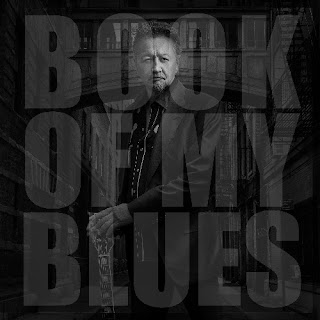 Country music vet Mark Collie announced the upcoming release of his new album Book of My Blues set for June 4, 2021 on BFD/Audium Nashville/Orchard in association with Harvest Entertainment, Creator Label Co., and Collie Kuhl Music. The first single, “Born Ready” is available on all digital services today along with an accompanying video that is one of a series of music videos from the album directed by acclaimed director and screenwriter Jonathan Hensleigh and shot by award-winning cinematographer Tom Stern.
The themes in Book of My Blues, those of love, lust, betrayal, addiction, recovery, damnation, and redemption are derived from the graphic novel Rockabilly Hitman, a long-gestating collaboration between Collie and director Hensleigh (“The Punisher,” “Die Hard with a Vengeance,” “Armageddon” and the soon-to-be-released “Ice Road” starring Liam Neeson) that depicts the exploits of rockabilly singer Jesse Wayne Hardin, who by night is an avenger of evil, as he travels the hard backroads from Muscle Shoals to Memphis, from the Mississippi Delta to Music City.
“Writing songs from the perspective of this character has been an enlightening journey. Some of my life experiences are in that character and I have stood at many of those same crossroads,” commented Collie. “Every line and nuance is intended to help bring Jesse Wayne and the ‘Book of My Blues’ to life. There are a lot of ways to describe the music, maybe Roadhouse Rock, Southern Gothic, Americana, Country, but at its core it’s a reflection of me and many others who came before me.”
The album features twelve original songs written or co-written by Collie, plus three rockabilly classics – “Hey Boba Lou” by Ronnie Hawkins, Jacqueline Magill and Robbie Robertson of The Band fame, “Night Train to Memphis” written by Country Music Hall of Fame member Owen Bradley along with Marvin Hughes and Beasley Smith, and the rockabilly standard by Carl Perkins, “Matchbox.” The album was co-produced by Kenny Greenberg (whose producer credits include Allison Moore, Josh Turner, Toby Keith and the Mavericks) and Chad Cromwell (whose credits include his work with Joe Walsh, Neil Young, Willie Nelson and Boz Scaggs).
The co-writers with Collie reads as a who’s who of songwriter elite, including Collie’s long-time friend Billy Bob Thornton who combines with him on the title cut, Tom Douglas, Gary Nicholson and John Scott Sherill, as well as Jonathan Hensleigh and co-producers Greenberg and Cromwell.
Track Listing with songwriters:
1. Book of My Blues with Billy Bob Thornton (Mark Collie, Billy Bob Thornton)
2. Born Ready (Mark Collie, Kenny Greenberg, Gary Nicholson)
3. On the Wings of Your Love (Mark Collie)
4. Right This Wrong (Mark Collie, Kenny Greenberg)
R. Matchbox (Carl Perkins)
5. Holly Springs (Mark Collie, Kenny Greenberg, Chad Cromwell)
6. Unfinished Hurting (Mark Collie, Tom Douglas)
7. Queen of A Hungry Heart (Mark Collie, Kenny Greenberg, Chad Cromwell)
8. Sinking Sand (Mark Collie, Kenny Greenberg, Chad Cromwell)
H. Hey Boba Lou (Ronnie Hawkins, Jacqueline Magill, Robbie Robertson)
9. Put the Gun Down (Mark Collie)
10. Walk the Floor, Kill the Lights, Slam the Door (Mark Collie, John Scott Sherill)
11. A Little Every Day (Mark Collie, Kenny Greenberg, Chad Cromwell)
12. The Son of a Gun (Mark Collie, Jonathan Hensleigh)
13. M. Night Train to Memphis (Owen Bradley, Marvin Hughes, Beasley Smith) 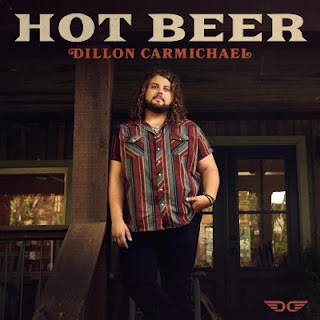 Dillon Carmichael delivers his distinctive Kentucky-bred deep holler baritone that's far more 90s country than much on the radio dial today on his ‘Hot Beer’ EP, out May 14. The 6-track collection is chock-full of music from standout songwriters including Hardy, Ashley Gorley, Jessi Alexander, David Lee Murphy and others.
This week, Carmichael shares his rendition of Montgomery Gentry’s “Lucky Man,” a song close to his heart — not only because it was recorded by his uncle Eddie Montgomery, but also because the pandemic has allowed him to reflect on the many reasons he has to be thankful. The visualizer with this song includes an Opry performance, family and friends, the cities his career has allowed him to visit, and on top of that, his recent engagement. Watch the heartwarming video here: youtu.be/wdxSdn2ZYqs
“Lucky Man” follows the Bakersfield-tinged title track “Hot Beer" and TikTok-viral hit “Sawin’ Logs,” which both showcase Carmichael's knee-slapping humor and were produced with the help of Jon Pardi. In the hilarious “Big Truck," Carmichael questions the motives of his girlfriend’s affection — is it because of his big heart or his lift kit? On a more serious note, “Somewhere She Ain’t” addresses heartbreak, and “Since You’ve Been In It” is a traditional Carmichael love song.
‘Hot Beer’ is part I of Carmichael’s new music, and a full LP is expected later this year.
1. Hot Beer (Michael Hardy, Ashley Gorley, Hunter Phelps, Ben Johnson)
2. Big Truck (Dillon Carmichael, Jessi Alexander, David Lee Murphy)
3. Lucky Man (David Lee, Dave Turnbull)
4. Somewhere She Ain’t (Carmichael, Alexander, Ben Hayslip)
5. Since You’ve Been In It (Carmichael, Ray Fulcher, Michael Whitworth, Daniel Ross)
6. Sawin’ Logs (Brandon Kinney, Brice Long, Wynn Varble) 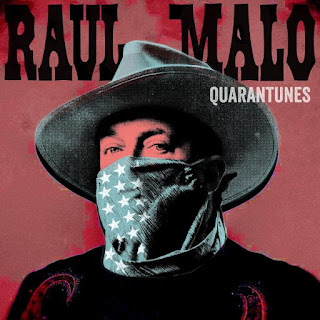 Mavericks frontman Raul Malo released a large collection of songs he recorded over the last year this week and has called the album Quarantunes, Vol. 1.
Malo says about the project, “As the pictures came in of empty streets across the globe, it was apparent this pandemic was going to last a while. This project stemmed from the idea that we were all in this together — everyone at home, doing what they can. It started in my home studio one rainy day, just me and the Mellotron, recording songs I’d never done before. As time went on, I brought in other talented players to contribute: Hector Tellez Jr, my sons Dino and Max, my friends The Band of Heathens, and of course The Mavericks. Although this quarantine chapter will be behind us one day, I hope this record can serve as a reminder that even in the darkest of times, there’s always room for a song.”
1. Love
2. Spanish Eyes
3. Ramblin' Rose
4. Solamente Una Vez
5. Wooden Heart
6. Galway Bay
7. Cha Cha Cha D'Amour
8. Jersey Girl
9. Santa Lucia (feat. Lisset Diaz )
10. Hey Gumbaree
11. Besame Mucho
12. Forever and Ever
13. Perfídia (feat. Hector Tellez Jr )
14. Maria Elena (feat. Hector Tellez Jr )
15. I Just Want To Dance With You
16. Moonglow
17. Those Were The Days
18. Brazil
19. All Of Me
20. My Way
21. The Sound Of Silence
22. Every Little Thing About You
23. Here Comes The Sun (feat. The Mavericks )
24. (Waiting For) The World To End (feat. The Mavericks )
25. Sweet Caroline (feat. The Mavericks )
26. Sinners and Saints (feat. The Mavericks )
27. Ventura Highway (feat. Hector Tellez Jr )
28. Back In Your Arms Again (feat. The Mavericks )
29. My Sweet Lord (feat. The Band of Heathens )
30. A Change is Gonna Come
Posted by That Nashville Sound at 8:35 AM