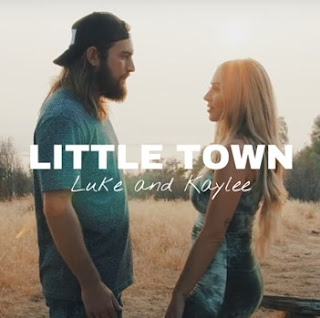 Luke and Kaylee’s mutual love for country music and passion for performing first led them both to Nashville to chase their musical dreams, then eventually into each other’s arms when their shared love of music turned their friendship into something more.

The talented duo first crossed paths as students at Nashville’s Belmont University, and soon found themselves performing together and writing songs. They each took unique paths that led them both to Music City. California native Kaylee hails from a musical family and grew up watching her father play the drums professionally, and it wasn’t long before she was sharing her gift, singing in both school and church. She later joined The Olson Band, and the group developed a strong following in the Pacific Northwest, racking up almost 5 million streams on Spotify with their songs and opening for acts like Dwight Yoakam, Dylan Scott, Phil Vassar, Love and Theft, and more.

Luke also spent time singing in choir and musicals growing up in Olympia, WA, and played sax in the marching band as well. In 2013, he formed a country band with his brother and began writing songs, and the two eventually won a national songwriting contest that earned them a trip to Nashville and an introduction on the hallowed Grand Ole Opry stage. By 2016, he was enrolled at Belmont as a student, where he met Kaylee, who would become his partner in both life and on stage.

The duo is releasing their newest single and music video “Little Town” this week on Black Sheep Records- and That Nashville Sound is thrilled to be able to share the new music video to the world today.

Posted by That Nashville Sound at 5:45 AM

Email ThisBlogThis!Share to TwitterShare to FacebookShare to Pinterest
Labels: Luke and Kaylee, Up And Coming New Nashville