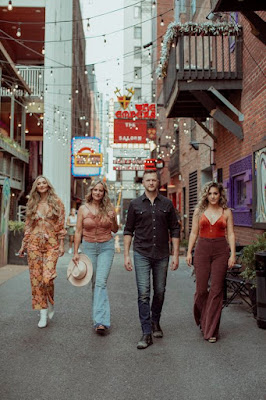 What happens when four highly talented Nashville solo artists and songwriters come together and form a group well into each of their respective careers?  They call it The Six One Five Collective and go make some musical magic.

The Six One Five Collective — composed of award-winning songwriter/artists Jamie Floyd, Michael Logen, Nicole Witt, and Sarah Darling — have unveiled themselves to the world and released its acoustic cover of The Weeknd’s “Blinding Lights,” the first track from the group’s upcoming debut EP called Coastin'.

Steeped in the Music City mix of country, Americana, folk and pop (615 is Nashville’s area code), the sound of Six One Five Collective is an undeniable wall of distinctive harmonies and solo voices reminiscent of great American bands like Fleetwood Mac, and Little Big Town.

The Six One Five Collective’s roadshow is an eclectic mix of original solo music, hit songs they've written for household names like Kelly Clarkson, Kesha, George Strait, Lee Brice, Ingrid Andress, Marc Broussard, and Sister Hazel (as well as several TV shows such as “Nashville” and “Parenthood”), and high energy songs that are the “Six One Five sound.” Its four members have toured around the world opening for John Legend, India Arie, John Hiatt, Kenny Chesney, and others. They've played the Grand Ole Opry stage, C2C and have toured extensively overseas. They are nationally-awarded artists and songwriters with three Grammy nominations and an IBMA Song of the Year honor.

The Six One Five Collective’s six-track debut EP Coastin’ is slated for release on Sept. 16, 2022.

About the Six One Five Collective’s artists:

Nicole Witt is a nationally-touring, award-winning songwriter and multi-instrumentalist known for her soaring melodies and clever turns of phrase. She has written songs for artists such as George Strait, Lee Brice, Rodney Atkins, Jana Kramer, Terri Clark, Lauren Alaina, Balsam Range, Mandisa, and many more. In 2011, Witt received the international Bluegrass Song of the Year Award for Balsam Range’s “Trains I Missed.” In 2014, she was nominated for a Dove/GMA award for Country Song of the Year. She has moved into TV and film writing with song credits on shows like “Reign,” “American Idol” and the short film score called Black Mountain. Her latest cuts came in the spring of 2021 with a track called “Stronger” on Ellie Holcomb’s Canyon album and a song called "You Ain’t" that is set to release to Canadian country radio in the summer of 2022 by Canadian country star Aaron Goodvin and Meghan Patrick.

Witt has spent the last 10 years writing and touring while building a grassroots small business as an artist, songwriter & mentor. In the past 3 years she has played over 200 dates performing all over the country and world opening for Kenny Chesney, Old Dominion, Trace Adkins, Billy Currington, Bacon Bros & many more.

Michael Logen is a Grammy-nominated, platinum-selling singer/songwriter whose songs have been recorded by artists like Kelly Clarkson, Mat Kearney, Jonny Lang, Will Hoge, Brandon Heath, Marc Broussard, Sister Hazel, Sam Palladio, The Greencards, Ashley Monroe and others. He has opened for artists like John Legend, India Arie, John Hiatt and Sarah Jarosz as well as headlining multiple U.S. and European tours. His songs can be heard on TV shows like “Nashville,” “Suits,” “Parenthood,” “Beauty And The Beast,” “The Fosters,” “One Tree Hill” and many others including The Olympics. Most recently, in 2021, during lockdown in Nashville, he released a duo project with friend and collaborator Jennifer Hanson entitled, Here's To Hoping, garnering praise from both American Songwriter and Rolling Stone. Michael was just recently named an official member of the prestigious Grammy @recordingacademy Class of 2021.

Jamie Floyd is a Nashville based two-time Grammy-nominated songwriter & recording artist who just became the first songwriter signed to Randy Jackson & Andrew Rollins’ new LA based publishing venture, Left On Sunset. She is currently recording her new project Crying On The Dance Floor which marks her debut pop offering — a collection of “sad songs you can dance to!” She was also just featured in three different live performance slots and was awarded 2021’s Rising Star Award by the Concert For Love & Acceptance, a televised charitable event organized by Ty Herndon’s Foundation for Love & Acceptance and CMT. Jamie co-wrote the current single from Kelly Clarkson & Jake Hoot (Winner of The Voice Season 17), a duet called “I Would’ve Loved You.” The song and music video, released in early 2021, have appeared on the Today Show, The Kelly Clarkson Show & The Voice season finale! After the independent release of her last EP New Girl, which debuted at #6 on the iTunes Country Album charts, Jamie made her Grand Ole Opry debut, opening for Metallica & Three Days Grace in 2020. She has written songs recorded by Kelly Clarkson, Kesha, Brian Wilson of The Beach Boys, Miranda Lambert, Sturgill Simpson, Ingrid Andress, Brian McKnight, Wrabel, Kalie Shorr, Ty Herndon, Ronnie Dunn, Ashley Monroe, Madi Diaz, Jake Hoot, Cassadee Pope, and more. Jamie plans to release her new music and tour extensively beginning in 2022.

Iowa native Sarah Darling has developed collaborations with writers and producers in Nashville, Los Angeles, and the UK, giving her a distinct and contemporary country sound. Her credits include 5 full length albums, multiple singles and duets. The latest release, The Campfire Sessions, is an acoustic collection of country songs that inspired us all. Tracks include “Wide Open Spaces,” “Bring on the Rain,” “You’re Still the One,” and even a country version of “California Gurls.” The last full album release, Wonderland, reached #1 on the official UK Country Charts. She has over 20 million streams on streaming platforms, over 11 million video views, and over 600k worldwide fans. She has performed on many historic stages – Grand Ole Opry stage over 95 times, BBC Radio, C2C London, Conan, HLN and more. Sarah just finished her Coastin’ tour that took her from coast to coast this spring. Her new EP Darling is out now.

Posted by That Nashville Sound at 7:55 AM