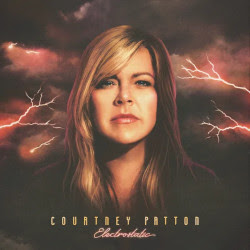 Influence. Webster defines it as the power to have an important effect on someone or something… that if someone influences someone else, they are changing a person or thing in an indirect but important way forever. With a poet’s heart, Courtney Patton fuses the power of lyrics, a healthy dosage of musical influences and narrative to build an incredible set of songs on her new 2022 album, Electrostatic. With one listen, you will be changed how you will think about music.

To know Courtney Patton is to know that she can do anything and everything. Patton’s a mother, a wife, a producer, a singer, a songwriter, a sometimes personal-tour-van driver and a musician. When the Covid world as we know it stopped concerts in their tracks in early 2020, Patton and her husband, fellow Texas troubadour, Jason Eady, kept the heart of live music alive with a weekly program called Sequestered Songwriters. It included all of their dearest musical friends, from Matraca Berg to Cody Jinks. The shows were themed, doing covers and dedications to bygone country artists some weeks and performing favorite country 90’s tracks other weeks. It was over the course of this year, with weekly and always-beautiful dedications to the likes of Bonnie Raitt, James Taylor, Vince Gill, The Eagles and Ronnie Milsap, Patton- perhaps consciously, perhaps subconsciously- had her songwriter craft and musical tastes both sharpened and broadened.

The result on Electrostatic is clear. Compared to previous more-stripped down previous projects, this new album has more depth musically without losing any of the of the highly personal and open-book songwriting that she’s become so loved for. It feels more soulful, more full than previous projects. In spots it feels jazzier, and on one track, even draws on Spanish influences to create an incredibly rich tapestry of sound to go with lyrics that are armed with sensitivity and sentiment. It’s as if she’s internalized the influences of her own musical heroes and manifested it into her own autobiographical dedication to music itself. Says Patton on the project, “I didn’t initially start the project with this intent, but as we were making it, I could hear all of my musical heroes and influences organically coming out in each song. And that brought me so much joy and comfort.”

The new project follows a wild two years of her own personal deep dive into the back catalogs of nearly every single artist she ever loved, not just listening and hearing the lyrical idiosyncrasies and chord progressions, but actually spending hours upon hours learning how they were played. Studying why they connected with her emotionally. Investigating how they were delivered and what made them so meaningful. Patton became a deeper student of music. And it shows on and through this new project.

They lyrics themselves are as personal as anything that Patton has recorded before, however. Nowhere is this truer than with the title track, a dedication to her sister whom she lost in a vehicle accident nearly two decades ago. The song is a tribute to the influence that still exudes from those that have passed away. Patton says, “It’s a song about finding the beauty still around you in the memories of those that we’ve loved and lost. If energy can’t be created or destroyed, then we can see and feel them all around us every day and there’s something comforting and beautiful about that in itself.”

Every piece of the new project has Patton’s fingerprints and influence on it. She co-produced the project with both her husband and the Band of Heathens’ Gordy Quist. Musicians on her latest project include a group of all-star musical talents such as Geoff Queen (Kelly Willis, Bruce Robison, Reckless Kelly) on guitar and pedal steel, Trevor Nealon (Jerry Jeff Walker, Rodney Crowell, Jack Ingram) on piano and keyboards, Heather Stalling (Max Stalling, Johnny Lee, The Old 97s) on fiddle, Richard Millsap (Ray Wylie Hubbard, George Strait, Lee Roy Parnell), Naj Conklin on bass and half of the acclaimed band The Trishas on back-up vocals in Jamie Lin Wilson and Kelley Mickwee. Each bring their own unique influences to the project as well.

The project follows previous solo albums, Triggering a Flood (2013), So This Is Life (2015), her acoustic collaborative project with her husband Jason Eady, Something Together, (2017), and her extremely autobiographical project, What It’s Like To Fly Alone (2018).


Posted by That Nashville Sound at 8:44 AM