Alabama's Jeff Cook Passes Away At Age Of 73 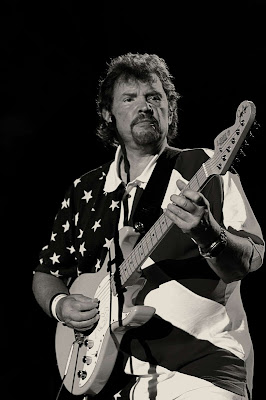 For the third time in five weeks we have to say goodbye to a Country Music Hall of Fame member.  This time, it’s Jeff Cook.

Cook, the fiddler/lead guitarist in the band Alabama, died Monday (11/7) at his home in Destin, Florida.  He had been battling Parkinson’s disease for years, which had forced him to retire from touring with the band in 2017.

One of three cousins from the Sand Mountain region of northeastern Alabama (the same area that gave us other Hall of Famers Ira and Charlie Louvin and Alton and Rabon Delmore), Jeff Cook was born in Fort Payne on August 27, 1949.  The cousins began under the name Wild Country in 1969, playing throughout the southeast (with a special affection for Myrtle Beach) before changing their name to match their home state.

With the breakup of the Eagles in 1980, Alabama stepped in to fill the shoes for fans of country-rock with tight harmonies.  They had crossover appeal (with “Love in the First Degree,” “Feels So Right,” and “The Closer You Get” making the Billboard pop top 40), but they owned country music in the 80s.  They had an unbelievable 21 consecutive #1 hits, a string that began with “Tennessee River” in 1980 and ended when 1987’s “Tar Top” “only” made it to #7.  (Don’t feel too bad, though, because nine of their next ten singles hit the top spot, too.)

According to the Whitburn, their biggest hit was 1990’s “Jukebox in My Mind,” which contained that subtle nod to Ernest Tubb’s signature guitar riff after the line “It’s playing all my favorite memories.”

K.F. Raizor, author of the website Raizor's Edge is our guest writer today on That Nashville Sound. She's ever so gracious to provide wonderful tributes to honor those to whom the music we treasure just wouldn't be the same without. Thank you, K.F.

Posted by That Nashville Sound at 5:46 AM

Email ThisBlogThis!Share to TwitterShare to FacebookShare to Pinterest
Labels: Alabama, Jeff Cook, The Day That The Music Died