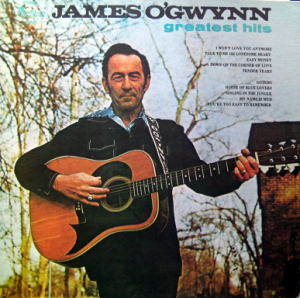 James O'Gwynn passed away yesterday morning in Hattiesburg, MS after a battle with pneumonia. He was 82. He will be buried in Waynesboro, MS. Funeral arrangements not known as of this writing.

Between 1958 and 1962, he recorded for the D and Mercury labels, charting six times on the Hot Country Songs charts. His work on the D label was produced by Pappy Daily, best known for producing George Jones.

O'Gwynn's highest-peaking single came during his Mercury career, when he reached #7 with "My Name Is Mud." None of his other singles afterward made the charts, and he moved among several labels, including United Artists Records and Plantation Records.

Below is a recording of "House of Blue Lovers," a single that went up to #21 in 1961 on the US Country charts.

Posted by That Nashville Sound at 9:17 PM

Email ThisBlogThis!Share to TwitterShare to FacebookShare to Pinterest
Labels: George Jones, The Day That The Music Died