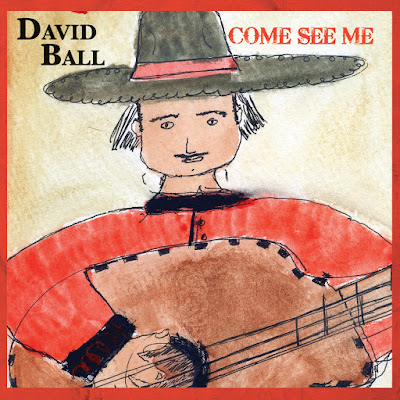 Recorded at his home studio in Franklin, TN, this may be David’s most personal record yet as he's written and produced every song. Aside from drums and percussion contributed by Scott Metko, David played all instruments.

Fans can contribute to his Pledge Music site here, which will be managing the release of the full record and exclusive new merchandise.

Ball grew up in Spartanburg, SC where he learned to play guitar but later honed his skills on the upright bass, which led to a gig playing bass in Uncle Walt’s Band, credited as the first Americana act. The legendary trio was headed by Walter Hyatt and also included Champ Hood. A solo career led Ball to Nashville where he signed a publishing deal and later, a recording contract. David’s music came full circle when Lyle Lovett reached back into Uncle Walt’s Band repertoire to include one of David’s early songs, "Don’t You Think I Feel It Too” on his 2009 disc, Natural Forces. David won a Grammy Award for the song “Old Folks At Home (Swanee River)” from the album Beautiful Dreamer - The Songs of Stephen Foster. (2005) Fourteen of his singles have entered the Billboard charts, including “Thinkin’ Problem” and “Riding With Private Malone,” which made Ball one of the first artists to take an indie single to the Country Top 5. He has recorded a total of seven studio albums, including his platinum certified Thinkin’ Problem. The title track was the top selling country song of 1994.
Posted by That Nashville Sound at 6:12 AM